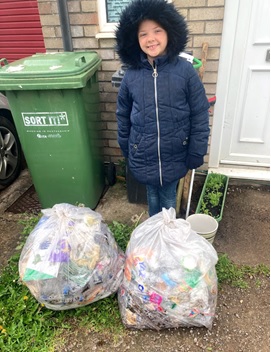 Litter picking! It was properly raining when I headed out at 8:30 am on Saturday morning. I armed myself with litter picker, hoop and bag and a spare bag in case it was needed, and my cycling gloves and headed out into the morning greyness.

I made an easy start by picking up random masks and litter which had accumulated on my own grass, but the road I live on was really tidy and my bag was still mostly empty as I approached the lane I was due to litter pick down. The litter down here was mostly sweet wrappers and those little bits of plastic wrapper you get on straws on drink cartons, really irritating tiny little bits of plastic which are really trying to pick up with a litter picker, still quite light and tidy, the growth of nettles and wild flowers along the edges of the lane were probably hiding a multitude of other rubbish but this time of year it can hibernate there until it becomes visible again. The nettles look lovely and healthy and I’m a big fan of nettles as they support a lot of bugs so I hope they don’t strim them too soon!

I got to the field and walked along the lane a bit, here there is a path where most people walk and a secondary path behind the bushes, so I picked the litter along the main path and then switch to go into the bushes. This was just downright awful! Part of the problem was the trees and bushes had been cut back and the cuttings just left where they dropped, wood chips were also dumped along a lot of this area. This meant that the litter I could see was under a network of cut branches and brambles and wood chips. I was digging it out. Frustratingly, there was a lot there, plastic bottles, cans, dog poo bags, but all quite difficult to get at. This is why it took me so long to litter pick a relatively short stretch of a field.

About half way down, there was a stash of so many cans of the same type it looked like someone had made it their permanent camp. Also loads of plastic carrier bags and the six-pack rings which hold the cans together. These are particularly dangerous to wildlife and I honestly thought they didn’t get used any more, even back in the 1990’s as a kid we used to cut them up so as to make them safe for wildlife, you would think this many years down the line things would have changed. We actually tried to rescue a seagull once which had one round it’s neck but failed to catch it. It was very distressed. 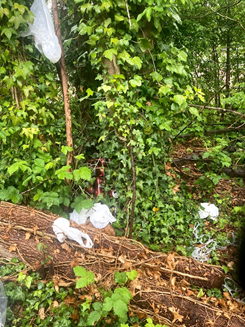 There were 13 six-pack rings, about 15 Natch cider cans hidden in the gap between the trees, I found other cans the same chucked into other bushes, they all looked very recent and the bags were stuffed in gaps in trees and hung on branches. There were several unopened bottles of cider, which is a bit odd and one unopened can.

Then after that there was just the normal detritus you would expect, loads of crisp packets, plastic bottles, chocolate bar wrappers… as I looked ahead I could see several bits and bobs of litter and looking back I saw it was all clear, it was re-assuring to feel I was making a difference. I also then realised that a robin was following me, probably as I was distrurbing bugs as I picked up the litter, but it felt like he’d moved back in because I’d cleared up the area for him 😊 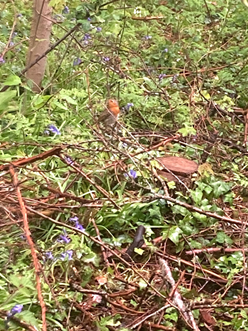 When I came out of the bushes the area looked really clear, I thought I was over the worst of it, but then looking towards the path I realised most of a pack of maoam sweets had been eaten and the wrappers all just dropped on the floor along with a pack of oreos.

The individual wrappers were really difficult to pick up as they were small and paper and were stuck to the wet concrete. It’s really distressing to see that people don’t even try to make an effort to put this sort of thing in a bin or their pocket but just drop it where they stand as they eat. There was a bin within 5 steps of where this rubbish was. It’s really difficult to see how we could make this easier for people.

There were some hard-to-reach places in the area around the rec where people had chucked stuff over or through fences and with no access most of it had to be left, I spent a good few minutes trying to bring a glass bottle back through a gap in the fence that it wouldn’t fit through, and in the end had to admit defeat!

The rest of the litter pick was easy going, a load of McDonalds wrappers had been dumped on the library lawn but other than that there wasn’t much. There were so many of us out and about today, I think the whole area will be clean as a new pin, but by tomorrow morning it will all be getting messy again.

To quote the Incredibles … 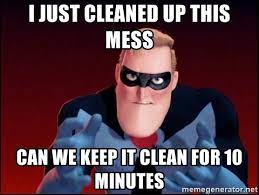 In the end, I came home with two pretty full bags, some of which was glass shards or other dangerous stuff which I was very glad to remove from the path of animals and kids. I came away thinking I need to do it more often, but also shattered and with a cramp in my hand from using the gripper so much!

My overriding feeling is that although we have improved our local area, it’s disappointing that so many people really don’t care enough to make any attempt to not just chuck their rubbish on the floor. It would be good to understand how we can get the message through to people, and although some of it will be teens and young adults, it’s also primary school kids, and the adults who are with them and the adults walking their dogs and parents everywhere who are not reinforcing such a basic message of caring for the world we live in.

My daughter came with me to collect the bag and decided to take the credit! 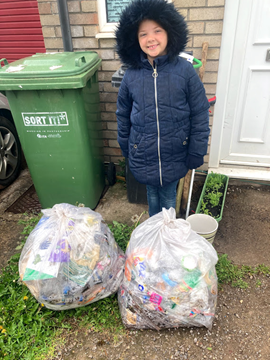